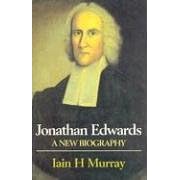 Ian Murray is no stranger when it comes to Christian biography. He has written the definitive two volume authorized biography of D. Martin Lloyd Jones (he served as Lloyd Jones’ assistant at Westminster Chapel (1956-59) and at Grace Chapel (1961-69), A. W. Pink, and John Murray. He is one of the co-founders of the Banner of Truth Trust, which was started in order to reprint and revive some of the classics from the Reformation and puritan eras. Prior to their organization in 1957, much of the classics from this period were difficult if not impossible to find.

This biography was first published back in 1987 (503 pages in length), and prior to that time a new biography on the life of Jonathan Edwards had not appeared for about fifty years. Since then, a new biography on Edwards’ life was released in 2003 by historian George Marsden. Thankfully, Jonathan Edwards has made something of a comeback in recent years. Desiring God Ministries hosted a conference in 2003 to celebrate Jonathan Edwards’ 300th birthday entitled, “A God-Entranced Vision of All Things: The Unrivaled Legacy of Jonathan Edwards.”1 Earlier this year Grace Community Church hosted the very first “Resolved Conference,” which was based on Edwards’ 70 resolutions that he made to himself while just eighteen years of age. I say he has made something of a comeback in recent years because although Edwards was revered by some in his own day, he was also considered obsolete or irrelevant and largely ignored by many. Ezra Stiles who was the President of Yale in 1771 (less than 30 years after Edwards’ death) was one who valued Edwards’ writings and used to require his senior class to read and recite him. By 1787 he gave up on this practice and wrote in his diary: “Edwards’ valuable writings in another generation will pass into as transient notice perhaps scarce above oblivion, as Willard or Twiss, or Norton; and when posterity occasionally comes across them in the rubbish of Libraries, the rare characters who may read and be pleased with them, will be looked upon as singular and whimsical” (p. 450).

Jonathan Edwards lived a fairly short life of 55 years (1703-58). Some of the significant events that the book records is Edwards’ first-hand account of his conversion in 1721 (p. 35), and how that affected his academic priorities at Yale University (p. 42). Prior to his conversion his main interest was scientific endeavors and he had written much on various subjects (insects, light rays, optics, blood circulation, etc), seeking to make a name for himself in Europe. In the same year as his conversion however, his shift focuses away from these scientific endeavors and instead towards biblical theology. Also included is Edwards’ first reference to his future wife Sarah in 1723, when he was 20 and she just 13:

They say there is a young lady in New Haven who is beloved of that Great Being who made and rules the world, and that there are certain seasons in which this Great Being, in some way or other invisible, comes to her and fills her mind with exceeding sweet delight, and that she hardly cares for any thing, except to meditate on him — that she expects after a while to be received up where he is, to be raised up out of the world and caught up into heaven; being assured that he loves her too well to let her remain at a distance from him always. There she is to dwell with him, and to be ravished with his love and delight forever. Therefore, if you present all the world before her, with the richest of its treasures, she disregards it and cares not for it, and is unmindful of any pain or affliction. She has a strange sweetness in her mind, and singular purity in her affections; is most just and conscientious in all her conduct; and you could not persuade her to do anything wrong or sinful, if you would give her all the world, lest she should offend this Great Being. She is of a wonderful sweetness, calmness and universal benevolence of mind; specially after this great God has manifested himself to her mind. She will sometimes go about from place to place, singing sweetly; and seems to be always full of joy and pleasure; and no one knows for what. She loves to be alone, walking in the fields and groves, and seems to have some one invisible always conversing with her (p. 92).

I don’t think anyone described me in comparable terms when I was 13! Four years following this journal entry, Jonathan and Sarah were married. Some of you may think that it peculiar that Sarah was married at such a young age of 17 but actually the average age of marriage for a girl was 16.

There is a whole chapter committed to the Great Awakening (pp. 153-76). The Great Awakening is dated from 1735-42, a time when much revival took place in the New England colonies. It is during this period (1741) that Edwards preached his most famous sermon, “Sinners in the hands of an angry God.” It was during this message that people were so overcome with emotion due to the sudden recognition that they were condemned because of their sin that they were literally crying out during the message and some were even evidencing unusual behavior. Ironically, this same message was preached in Edwards’ own church at an earlier time with little or no reaction. The book discusses Edwards’ view of the strange phenomena that was associated with it (pp. 217-18), the opinions of those who denied that the Great Awakening was true revival but merely fanaticism (what they used to call “enthusiasm”) or experiences that were motivated by the devil rather than the Spirit (see chapters 11-13), and his opinion of the revivals in hindsight 16 years later (p. 339). Although Edwards was firmly convinced that true revival took place during the Great Awakening, he was well aware that there were also excesses and he made sure to denounce them. He emphasized that true “religious affections” were often accompanied by very strong emotions because such would be the case when one came to a true realization of his sin and offence against God, yet he was careful to warn that because of this heightened sensitivity to divine things one can easily mistake “impressions” of the soul to be the leading of the Holy Spirit (p. 241). The chapter dealing with “religious affections” is quite helpful in bringing balance to raw emotionalism and dry orthodoxy (pp. 249-68). One of the most insightful points that Edwards makes in deciphering whether one has true religious affections or not is this: those who have true religious affections are apt to speak much of God and His works whereas hypocrites are more apt to speak of the discovery itself more than what is discovered (p. 258). Also, those interested in his friendship with the great preacher George Whitfield are treated with several written correspondences between the two (pp. 156-158) as well as Sarah’s description of his unction while preaching (p. 162).

Several chapters are committed to the Communion controversy that ultimately led to his dismissal (chapters 16-18). For those unfamiliar with the controversy, Edwards took over the congregation from his well-known grandfather, Solomon Stoddard. He had long implemented the practice of allowing anyone to partake in the Lord’s Supper provided that they had a profession of faith. Edwards knew quite well that many who made a profession of faith were not true believers because their lives were ungodly. He therefore insisted that a profession of faith must not be separated from a profession of godliness and that if one could not make a profession of godliness, he should be denied communion (see chapter 17). He had for almost 20 years adhered to the same practice as his grandfather but was later convicted that canned confessions of faith were insufficient evidence of true Christianity. He believed that the sacrament of communion must be guarded from unbelievers’ participation as much as can be determined, humanly speaking. This didn’t sit well with most in his congregation and as a result, he was dismissed from his pastorate at Northampton on June 22, 1750, after more than 20 years of service. This eventually led to his ministry to the Housatonic Indians in Stockbridge for the next seven years (chapters 19-20). In 1757 his son-in-law Aaron Burr (father of the eventual vice-president of the same name) who was the president of Princeton died, and he reluctantly agreed to replace him. He was installed as president in February of 1758 but it would be an office that he would hold for just over a month. Jonathan Edwards died of a small pox inoculation in March of 1758. Shortly before his death when Edwards knew the inevitable was in sight he spoke these words to his daughter Lucy:

Dear Lucy, it seems to me to be the will of God, that I must shortly leave you; therefore give my kindest love to my dear wife, and tell her, that the uncommon union, which has so long subsisted between us, has been of such a nature, as I trust is spiritual, and therefore will continue forever. And I hope she will be supported under so great a trial and submit cheerfully to the will of God. And as to my children, you are now like to be left fatherless, which I hope will be an inducement to you all, to seek a Father who will never fail you (p. 441).

There was much tragedy in the Edwards family during this time. We already mentioned that Aaron Burr, Edward’s son-in-law died shortly before Edwards himself (September 1757). In addition to this, Edwards’ father died in January 1758. And as his daughter Esther was mourning the death of her husband Aaron, she added the death of her father as well (March 1758). If that weren’t enough, a short time later Sarah wrote a letter to her daughter Esther in which she expressed her faith in God amidst these tragedies and urged her daughter to do the same (p. 442). Her daughter Esther would never read this letter because she went to be with the Lord herself on April 7, 1758, leaving behind two orphans, Sally and Aaron, Jr. Because her grandchildren were now orphans, Sarah Edwards traveled to Princeton in order to bring them back with her in Stockbridge. But tragedy was about to strike again. On the way back home to Stockbridge with Esther’s children, Sarah fell sick with dysentery and died on October 2, 1758. In the span of about a year, five deaths occurred in the Edwards family.

I obviously don’t have the space to comment on all the significant points in the life of Jonathan Edwards so I tried just to hit some of the high points. If you are at all interested in reading some of the works of Jonathan Edwards, I would encourage you to read this biography first in order to get a good idea of his life, thought, and motivation. I would not recommend this book to the casual reader but to those who are truly interested in the man that many call the greatest theologian that America has ever produced.

1 This led to the compilation book of the same name that is edited by John Piper and Justin Taylor. The essays in it are quite good and I would also recommend this book to you as well.