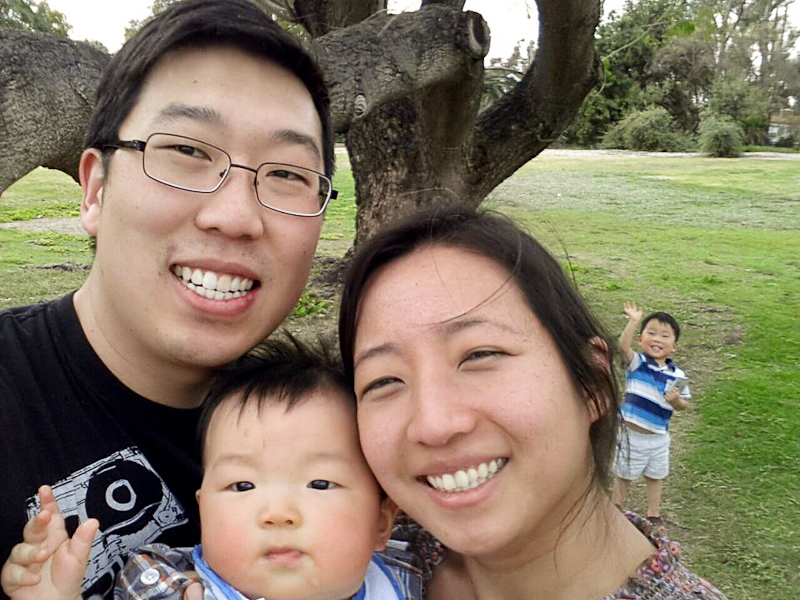 This time we get to know Daniel and Ashley Lee.  They have been coming out to IBC for over a year now and just became members in February.   With them, they bring along two little boys, helping push our children’s ministry to 100 and growing!  They currently live in the Pasadena area and have been actively involved in the East LA flock.  Read about how they met…or how they didn’t meet.    Someone has a bad memory!

Tell us a little bit about yourselves.  Where are you from?  Where you do you live? College (Major)? Occupation?  (What do you enjoy about your work?)

D: I graduated from UCSD with an Econ degree. I am currently working in Pasadena as a Commercial Real Estate Appraiser. I get to inspect various properties and put a value on them.

A:  I was born and raised in Fresno, Ca.  I attended UCSD – Revelle (B.A., Linguistics).  I then worked in Human Resources for various corporate businesses.  I am currently a homemaker with two boys (3 and 6 mos).  The best part of my work is that I get to be with my two favorite children all day long.  I don’t miss a new milestone, funny face, playtimes, and everything else (fun and not so fun).

How did you meet and when were you married?

D: Ashley and I met in college while attending a Christian fellowship (CCM). I distinctly remember when I started having feelings for Ash. We went on a senior trip to Vegas and we were to rendezvous in front of the Bellagio fountains. As Celine Dion and Andre Boccelli’s “Time to Say Good Bye” was playing, I happened to turn around and saw a light radiating around Ashley and everything around me just stopped…we got married about two years later.

A:  Daniel and I met our freshmen year in college at an on-campus ministry (CCM).  We were friends throughout our college years and he started to show signs of interest our senior year.  He often shares of the story at the Bellagio fountains, but I have no idea what he’s talking about.  According to my memory, he kept showing up everywhere I was.  He also AIM chatted with me every time I signed on.  Eventually Daniel confessed to me his true feelings.  We began to date in the middle of our senior year and he proposed one year later (2008).

What do you like to do in your spare time? Hobbies?

D:  I’ve been hanging out with Henry and the East Flock guys recently. Ashley gives me a free pass when they call. I like to go fishing, attempt to play golf, and watch basketball. Eating is cool too.

A:  Since I became a mother and homemaker, my spare time is usually spent taking a nap, lounging and surfing Instagram and Pinterest.  When I have the time and energy my hobbies include reading, sewing and crafting.

How did you first hear about IBC?

D: Some of Berean’s leadership attend seminary with Wayne H. and they recommended IBC to us.

A: I first heard about IBC while attending Lighthouse Bible Church in San Diego.

When did you become members of IBC? What made you want to pursue membership at IBC?

D: We just recently became members in the beginning of this year. Previously, we commuted back and forth from LA to OC at our old church. We were unable to fellowship with others and were limited to how much we were able to serve in the church. By being a member of a local church, I am looking to build relationships with other brothers and sisters and seek accountability through small groups or flocks. Also, hopefully I will be able to find opportunities to serve the church.

A:  We became members in February 2013.  We believe that membership to a local church is very important for our spiritual lives.  We also feel like minded in the doctrine and theology that IBC teaches.  Our time at IBC prior to membership was so positive.  There were so many people in our similar life stage, everyone was very welcoming, great teaching, fellowship and wonderful children’s’ ministry.  Pursuing membership at IBC was an easy choice for us to make.

When were each of you saved? Can you give us a short testimony?

D: I grew up in a Christian home and went to church and stuff. So I knew what the bible said, but I didn’t really live it out. I was just the typical Korean kid that attended church, went to retreats, and did what my parents told me. Not until I went to college did I begin really living out God’s Word and be genuine with my faith. So I think I really got saved when I went to college.

A:  Similar to my husband, I attended church all my life.  I suppose that I believed I was a Christian because I went to church, my parents were involved in leadership, and I was a ‘good’ person.  I knew that I was a sinner and that God sent Jesus to die for me because He loved me.  I knew the right and wrong way of living.  But there were so many holes in my understanding of the gospel which showed in my way of living as well.  I struggled with many sins of the flesh.  When I went to college, I attended Lighthouse Bible Church and the college group was going through a study of soteriology (Study of Salvation) led by Pastor Patrick Cho.  It was then when I asked all my questions and the gospel became whole to me.  It was then when I realized my way of thinking and living was wrong and chose to living according to the gospel.

Do you have any favorite books or authors? Why?

D: Dr. Seuss because those are the only books I read now.

A: This is a hard question.  I have many favorite books.
Think Biblically (by John Macarthur) – A favorite because it helped me see the world through Scripture.  It was also the first Christian book I read in college.
A Tree Grows in Brooklyn
Anne of Green Gables

Who has had the greatest influence on your spiritual lives? How?

D: As a freshman, I looked up to all the upper classmen in my Christian fellowship. They taught me how a godly man looked like.

Do you have any favorites passages in the Bible? Why?

D: Joshua 1:9 –“ Have I not commanded you? Be strong and courageous. Do not be afraid; do not be discouraged, for the Lord your God will be with you wherever you go.”
It gives me encouragement knowing that God is with me whatever the circumstance.

A:  I don’t really have a favorite passage.

If you had a free Saturday, what would you do?

A: This would be my schedule starting at 7am.

If you weren’t what you do now (occupation), what would you be?

D: I love different types of music (reggae, trance, rap, country…). If I was more musically talented, I would want to be a music producer or a dj. Woot Woot!

A: I love history and France so I would be a museum curator at the Louvre in Paris.  Oui oui!

What is one thing you cannot live without?