In this entry, we get to meet Josh and Liz Wong.  They became members of IBC back in December 2011.  It was encouraging to see the two of them help out at our VBS a few weeks ago.  Both are proud almuni of UCLA and currently work with children.  Get to know them a little better in the Q&A below: 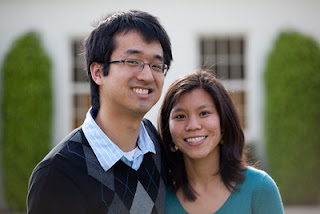 Tell us a little bit about yourselves.  Where are you from?  Where you do you live? College (Major)? Occupation?  (What do you enjoy about your work?)
Josh grew up in East LA.  Liz is originally from Castro Valley, which is in NorCal.  We currently live in Monrovia.  Both of us went to UCLA for undergrad.  Josh got his degree in Mathematics and Liz got hers in Sociology.  After completing graduate school, we began working for Los Angeles Unified School District.  Josh is a high school math teacher, and Liz is a Speech-Language Pathologist.  We enjoy helping children in the schools and seeing the progress that they make throughout the year.  Another great thing about our career choices is that we have the same holidays and summer off so we can vacation together!
How did you meet and when were you married?
We met at UCLA through mutual friends and got to know each other better while we attended AACF (Asian American Christian Fellowship).  We started dating during our junior year after Josh initiated the DTR talk.  We recently tied the knot in July 2011 and are still happily married.
What do you like to do in your spare time?  Hobbies?
Hiking, biking, photography, crafting, watching movies, and trying new restaurants.
How did you first hear about IBC?
Pastor Nam Park was the speaker at one of our AACF winter retreats.  We actually visited IBC once as collegians when we checked out churches, but were too intimidated by the vast number of kids and married couples.  Now we are one of them.
When did you become members of IBC?  What made you want to pursue membership at IBC?
We became members in Dec. 2011.  We wanted to become members so that we could be held accountable by the church and its members for our sanctification.  Also, we wanted to be part of the church through serving in various ministries.
When were each of you saved?  Can you give us a short testimony?
Josh-  I was raised at church since I was a child and was very familiar with the story of the gospel.  Although I knew the story of the gospel and its facts, it never had an active part of my life until the end of high school and the beginning of college.  It wasn’t until then did I become convicted and realized the gravity of my sins and a need for the Savior.  I accepted Christ near the end of high school and started to mature as a Christian in college when I started to attend AACF.
Liz- I grew up going to church and attending a Christian school.  My mom shared the gospel with me and I accepted Christ at an early age. I believed with child-like faith that I was a sinner and needed God’s forgiveness.  However, growing up throughout high school I struggled with legalism and hypocrisy.  In college, I came to a deeper understanding and appreciation for how the gospel was relevant in sanctification towards becoming more Christ-like.  I think this was the transforming point in my life that grew me in my dependence upon the Lord, rather than myself and I developed a deeper love for Him.
Who has had the greatest influence on your spiritual lives?  How?
J: My discipler that I had during college.  We met up weekly and discussed everything from academic troubles to dating troubles.  He was a continual prayer warrior for me and kept me accountable in my life.
L: Several of my small group leaders in college and in San Diego.  I appreciated not only their teaching from the Word but also their godly examples.  The girls really took the time to pray for me and challenged me to fight sin and pursue holiness in various areas in my life.
Do you have any favorite passages in the Bible?  Why?
J: Proverbs 31:14.  “She is like merchant ships; She brings her food from afar”.  While we were dating I remembered when Liz brought me home-cooked food from far away from her apartment all the way to one of the study lounges in the dorm.  I pretty much knew she was “the one” at that point.
L: Isaiah 40:29-31 and Romans 8:28.  They are some of the first verses I memorized way back and are particularly encouraging when I encounter seemingly helpless situations to remind me of God’s provision.
If you had a free Saturday, what would you do?
J: Take pictures at a place I have never been to.
L: Sleep in!  Then go to Disneyland.
If you weren’t what you do now (occupation), what would you be?
J:  Some sort of Law Enforcement.
L: Pharmacist.
Do you have any hidden talents?
J: I have a knack for finding amazing deals on items that I otherwise would not buy.
L: Guesstimating the time at any given point (usually within 5-10 minutes on a good day).
What is your favorite: TV show?  Movie?  Band/Music?  Food?  Sports team?
J:  24.  Ip Man.  Hans Zimmer.  Hot Dog.  Lakers/Dodgers/UCLA.
L:  Downton Abbey and Top Chef/other cooking competition reality shows.  Japanese food.  SF Giants/ Oakland A’s/ 49ers/ UCLA.